The following people have taken part in this month's hunt:


If you're taking part this month, please post the link to your post in the comments section or email me at cindersandrain (at) hotmail (dot) com!  I'll be putting my favourites up by 14th February.

Here are my January photos... 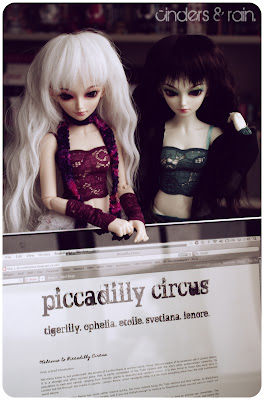 I've not made anything in the traditional sense of the word this month, but I have completely an overhaul of my BJD profile sites.  I do miss taking photos of the girls, I really should get them off the shelf more often. 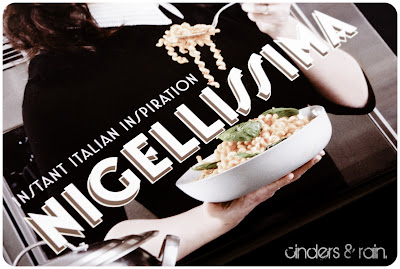 It even says so on the cover!  I feel a bit bad, I have managed to cut off Nigella's head, but photography on crutches is quite challenging.  When I'm fully mobile I intend on making something from this book.

I'm home after my surgery and doing well (I think!).  I have a solid rehab program planned out for the next six months, I just need to stick to it and do my exercises like a good girl. 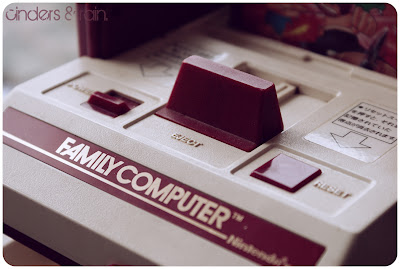 When it comes to retro gaming, it doesn't get much more retro than this!  I love the look of the FamiCom, it's a beautiful bit of kit. 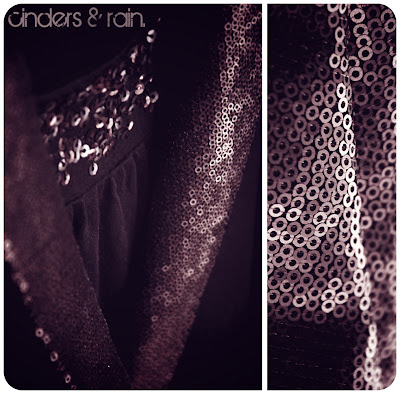 When I woke up on Friday morning, I thought that I would be spending this weekend in hospital.  I've been waiting for ACL reconstruction surgery for nearly two years now, and I was all ready to go in on Saturday morning to get it over with.  On Friday evening I found out that the admissions office had cocked up, and I'm actually going in on Tuesday morning.

As frustrating as the situation is, I'm actually feeling quite relieved.  We've had a brilliant weekend (last weekend was a bit of a non-event due to the snow) and I get to finish off some bits at work on Monday, so perhaps it's all for the best.

I still need to finish my CPSH submission - hopefully I'll be mobile enough on Wednesday and Thursday!
written by S. at 22:47 2 comments
about Crafty Photo Scavenger Hunt, surgery

One of the things I really dislike about renting is the inability to hang anything on the wall.  We do have a picture rail in our flat, but I'm not sure if I 100% trust it (that and it's currently busy keeping our fairy lights in place).  It's not too much of an issue though, as we don't particularly have anything to hang.

I've been thinking that when we do get our own place, it would be fantastic if we had a collection of really interesting pieces to adorn our walls, but I wasn't really sure what I wanted.  In talking to the boy, we eventually agreed that film posters were a good option.  But it feels a bit student chic, and I don't think the thought of paying to have something that is normally put up with blue tac framed.  If money was no object, I would search high and low for a set of Olly Moss' Star Wars posters, but there aren't any on eBay at the moment, and when they do appear for sale they're normally £1000+.

This evening, I stumbled across a goldmine.  I saw two films last year that really took my breath away, Drive and Hanna.  I found them both so compelling, I loved the plots, the acting, the camera work, the soundtracks.  The studio posters are all well and good as far as film posters go, but I wanted something a bit more artistic and slick.  Google Images soon directed me to Society 6, where I found these beauties. 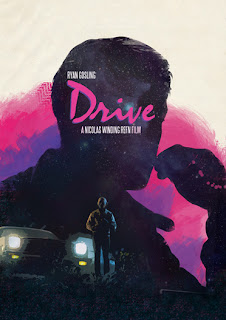 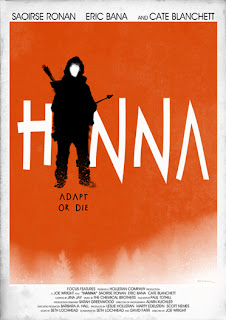 
I've had a good rummage through the site and I pretty much want to buy everything.  As well as the two above, I love these art posters for two of my favourite sci-fi films. 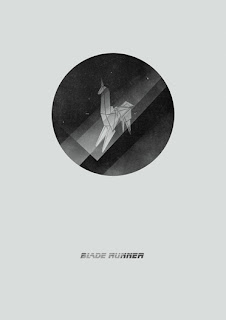 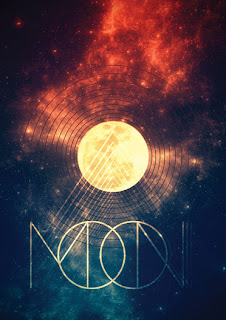 And of course, you can never go too wrong with a Star Wars poster set.  I really dig the simplicity of these designs. 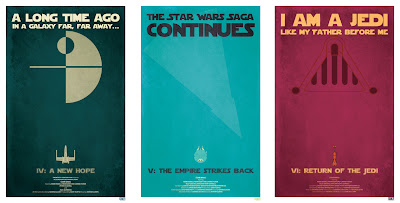 The boy bought me another Figma, Yuzuriha Inori, for Christmas and I got round to taking some photos this morning. 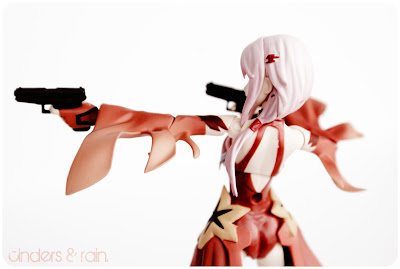 She really is a pleasure to photograph - for something that's made out of plastic, the fluidity in the design is astounding. 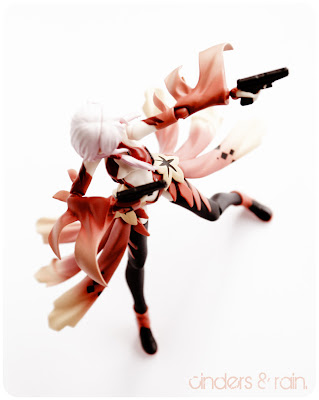 The rest of the set can be found on my Flickr.
written by S. at 18:52 0 comments
about collections, figma, photography, Yuzuriha Inori

Last night, as I was walking up Sloane Street on the way to my bus stop, I saw a bright flash of light in the sky travelling north.  It lasted for a few seconds, burning bright white, then orange before it fizzled out in a little puff of sparkles.  When I got home, I found out that the boy had seen it in Brixton too.  After comparing notes, we decided that it must have been a meteorite.  Having looked on Twitter, it looks like some other Londoners came to the same conclusion.

I love space.  When I was a young girl I used to go to the astronomy club in the local village and I've never really grown out of it.  I think it's science at its most awe inspiring and beautiful.  So it doesn't come as much of a surprise that I can't get enough of space themed design.

Here are some of my favourite shops. 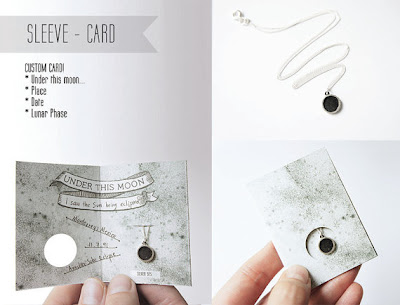 Under This Moon necklace

I've been a fan of gemagenta for a while now (her 'Lingerie' collection is simply stunning), but she's really outdone herself with her new 'Under This Moon' range.

The concept is simple.  If you have an anniversary that you want to commemorate, or a memento of a special night, you send her the details of when it happened and where you were, and she will create a moon charm showing the lunar phase for that location at that time, with the date carved on the back.  I really want one, I just don't know what occasion to pick! 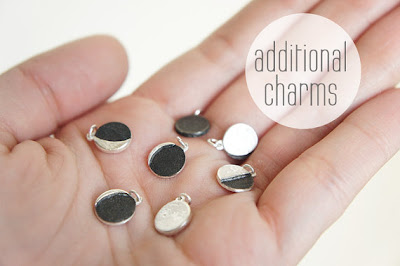 Under This Moon additional charms 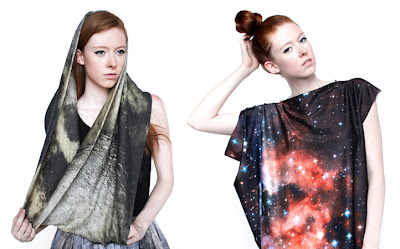 I've seen quite a few shops selling space/nebula printed goods lately, but ShadowplayNYC really takes it to the next level.  They don't make up their graphics, oh no, they use images captured by the NASA/JPL-Caltech, Hubble Heritage Team.  The results are simply stunning.  I'm especially tempted by the Moon Infinity Scarf (pictured above).  As I've said before, space provides us with some of the most beautiful naturally occurring phenomenon, and these pieces show it off in all its glory. 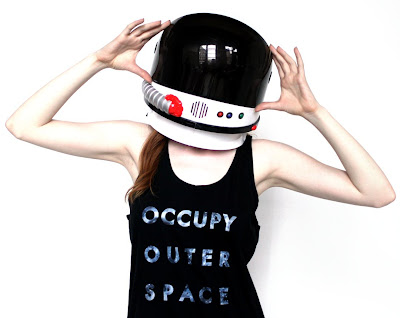 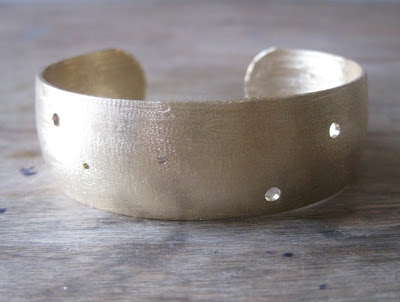 I think I first saw Julie Nolan's work featured in an Etsy email promoting zodiac themed items.  She produces gorgeous, minimalist silver pieces representing different constellations.  I've often thought that if I were to ever get a tattoo I'd go for a star map, so her style is right up my street.

She doesn't only do the twelve zodiac constellations.  I really love her Cassiopeia cuff (shown above) and Orion pendant (below left). 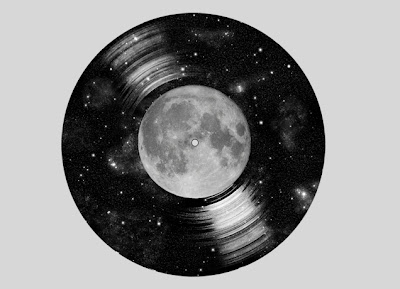 I haven't ordered anything from Threadless in a while, but having looked through their space section today I think I'm going to have to start saving my pennies!  I need the design above, Galaxy Tunes, in my wardrobe.

I've just got round to editing the photos of the quilt I made for my friend's baby girl, Georgie, last year. 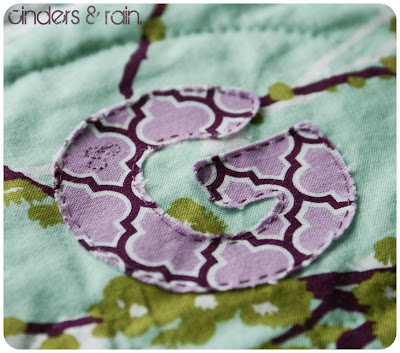 I still can't believe I actually finished it.  And it looked good.  The photos aren't that great as I took them in a hurry, the natural light was hideous and we had this horrific green netting around the scaffolding outside our window, but I still find myself looking at them and pinching myself. 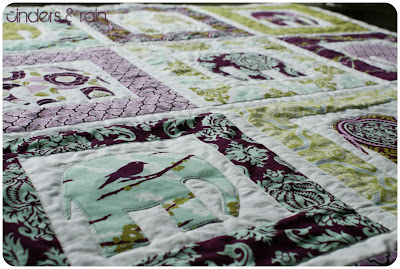 So I've decided to be brave this year and make a double bed sized quilt.  For keeps.  I'm so excited, I decided on a pattern the other day, created the mock-up in Photoshop last night (I didn't like the fabric used in the original pattern) and have just bought the fabric.  Squee!  Here is my selection. 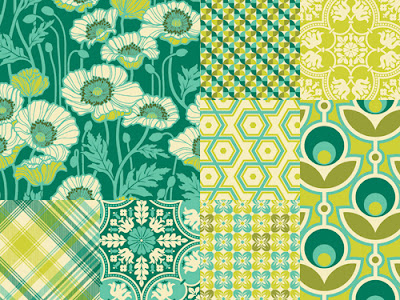 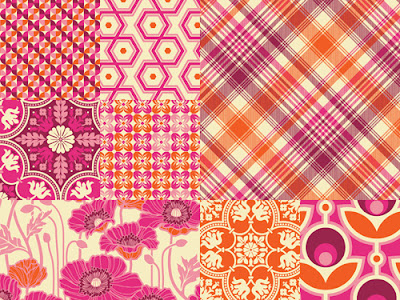 It's part of the new collection from Joel Dewberry.  I used his fabrics for the first quilt and they were such a pleasure to work with.  I'm really looking forward to getting my teeth stuck into a new project.
written by S. at 23:12 0 comments
about crafts, Joel Dewberry, photography, quilting

* I know that being a disciple of the Domestic Goddess and aspiring to eat healthily may sound like I'm setting myself up for a fall, but a girl has to live a little.
written by S. at 23:33 0 comments
about cooking, figma, January, monthly goals, Nigella Lawson, photography

out with the old.

I can't believe it's now January.  Where did 2012 go?  Rather than just sitting here feeling mildly shellshocked, I've decided to look forward to what the new year has to offer...

When Emma at The Gift Shed asked if I would like to join the hosting rota for the Crafty Photo Scavenger Hunt, I jumped at the chance.  I've been keeping an eye on this online project ever since it was first set up by Kiki at The Leopard Anchor.  Although I've not participated every month, I'm hoping that getting to pick the topics twice a year will give me the boost I need to really get stuck in.

So without further ado, here are the topics for January 2013. 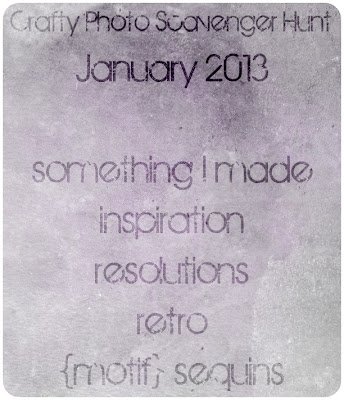 written by S. at 08:00 7 comments
about Crafty Photo Scavenger Hunt, hosting, photography
Newer Posts Older Posts Home
Subscribe to: Posts (Atom)
I sometimes dream of running to some sun bleached desert or green, dewy suburban wilderness and living like a character in a Coupland novel.
cinders & rain. is the online home of S., a twenty something living in London who loves geekery, Japanorama, feminism, literature, electronica, crafting and collecting whatever takes her fancy.