I'm on the train to London to stay with Cardy for the weekend. I'm looking forward to being in the city again - the last few days at home have been too quiet for my liking. I'm definitely a town mouse.

I've been having dreams about my MiniFee girls arriving. In some dreams I want to take photos of them but I can't find my camera - in others I have really grubby hands and can't touch them. Akiko at Vitta Vera sent me an email yesterday to let me know that photos of their clothes should be in my inbox soon. Perhaps that will take the edge off things? Then again, it may make it worse.

Waiting for the MiniFees has instilled me with the need to throw myself into my Pullips and Dals. I've bought Hero a new outfit - Rovam's stock! I'm looking forward to her being a proper pirate. There has also been a shift in the Dal tribe. My two Dals have been renamed Vesper and Video, and I have plans to get three more, all with names beginning with V (to tie in with the Roman numeral for five). Vesper and Video certainly have much more personality now. I've ordered a new wig, dress and teddy for Vesper, and the two of them along with Hero are getting boots from Ixtee. 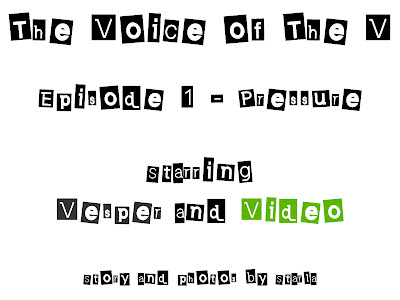 Click the picture to read the episode.
written by S. at 14:49 0 comments
about Dal, picfic, The Voice of the V, Vesper, Video

let the right one in.

This afternoon myself and Cardy went to see Let the Right One In at the Ritzy Picture House in Brixton. We've been gushing about how excited we were at the thought of finally seeing this film for over a week, so it had a lot to live up to.

Our 'OHMYGODIHOPEIT'SGOOD' gushing has since turned into 'OHMYGODTHATWASAMAZING' gushing. We were originally going to the Soho Curzon to watch it but decided that £12 was a bit steep for a cinema ticket. I would gladly pay that about of cash to see what can only be described as a cinematic gem.

Let the Right One In, a subtitled Swedish film, tells the story of Oskar and Eli, two twelve year olds ('more or less') living in Stockholm in the 1980s. Oskar is a mild-mannered boy who is bullied regularly at school. He spends his evenings imaging revenge and practising his knife-fighting skills on a tree in the courtyard of his apartment block. One night, whilst shouting at the poor, innocent tree, he is startled by Eli, a sombre-looking girl who is adamant that they can never be friends. The next evening, however, these two lonely characters find themselves talking in the snowy courtyard and a friendship quickly blossoms. Unlike your average twelve year old girl, however, Eli is a vampire who struggles to control her predatory instinct. Although she has to battle against her cravings, she becomes very protective over Oskar and gives him the strength to stand up for himself.

This film could have so easily have ventured into the Twilight realm where vampires are glamorous beings who twinkle in the sunlight and manage to curb their need for blood. Let the Right One In is a stark and chilling portrayal of vampirism and the effect it has on the infected. The audience, whilst acknowledging that Eli is no innocent, empathises with her and begins to understand her way of life.

The compelling plot is delivered with perfection by Kåre Hedebrant and Lina Leandersson, its two child stars. For actors of such a young age, the pair are a joy to watch and present two extremely well-developed characters. The tenderness that they share onscreen is achingly beautiful. The direction and production are also terrific - the whole film is very sparse, only Eli's red clothing occassionally shining through the snowscapes and cold blue lighting.

As Cardy has just said to me, 'this film is not about escapism'. It is not your average vampire flick with a gorgeous blonde heroine and a dark handsome hero. Let the Right One In is a blunt depiction of what it means to be a vampire and a victim, and how the two cannot help but go hand in hand.

All in all, a fantastic film. 10/10.
written by S. at 22:36 0 comments
about cinema, cinematic genius, film review, foreign cinema, Let the Right One In, scholar

I often chastise myself over the state of my Pullips' wardrobe. None of them have what I would consider to be a 'complete' outfit and only a few of them have shoes. I did have a finished outfit for Lux, but then I Obitsued her and now her leggings won't go over her bum. Oh the shame.

This problem must be resolved. I will, somehow, find the funds to kit out my girls. I'm considering selling some of my Bleeding Edge Goth dolls - I've worked out that if I sold off my whole collection for around £10 a piece I could raise over £800. When I get the dosh I think that adequate footwear will be the first thing to tick off my list. I'm aiming to get all my girls a pair of Ixtee boots. If I could make them clothes I would, but I'm afraid I'm going to have to search further afield for those.

In order to make sure that my resin girls don't suffer the same fate as the vinyl gang, I've put in an order with Vitta Vera. Photos will be posted when the outfits arrive!
written by S. at 12:33 0 comments
about BJD, Bleeding Edge Goths, clothing, dolls, Ixtee, Pullip, Vitta Vera

During my late night net surfage I came across Lawrence Yang's online portfolio, suckatlife.com. Not only did the domain name tickle me, but his art is also extremely cool and just the kind of thing that makes me tick. 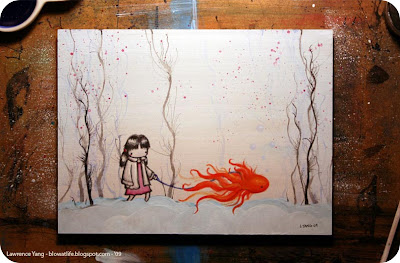 This is his biography:

Lawrence Yang wrestles with informational abstractions by day and paints by night. Influenced by graffiti art and traditional Chinese painting, he employs ink, marker, and watercolor, as the permanence of this media adds a sense of immediacy to his work. Lawrence's paintings make use of color to communicate atmosphere and emotion, and they are concerned primarily with creating order out of chaos (and vice versa). Lawrence once ate an entire bag of Fun Size Three Musketeers™. He lives in San Francisco with his imaginary pets, Cholo and Binky.

See, just up my street.
written by S. at 10:33 0 comments
about art, Lawrence Yang, scholar

I finally managed to get some decent photographys of Daphne, my Delirium custom. 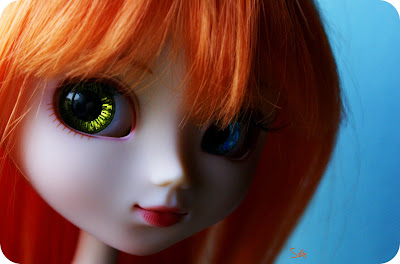 She's hard to capture due to her pale face and vivid orange hair, but I've finally got her.
written by S. at 19:11 0 comments
about Daphne, photography, Pullip, The Sandman

My Mother came home from work bearing gifts - well, one gift in point of fact.

Let me introduce you to Easter

I love orchids so very much. And Easter (I name my plants) is a divine specimen. She's a glorious shade of purple and her petals have a pearlescent quality.

Much better than an egg. 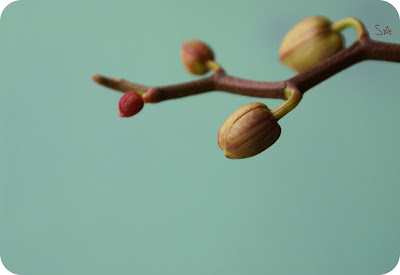 We'll be seeing more from her in future.
written by S. at 17:49 0 comments
about Easter, gift, orchid, photography, plants

In my haste to leave the house this morning I failed to eat a proper breakfast. All I had was a pitiful portion of honey nut cereal. I found myself snowed under by a blizzard of printing and photocopying and, despite my plummeting blood sugar levels, I didn’t manage to consume anything until after midday.

The sugar is filtering gently into my system. I can feel it, like a tingling under my skin. It’s glorious.

Cardy has begun to read The Sandman. I’m so glad that he’s finally giving it a go. Neil Gaiman is a literary genius. I need to do a photo-shoot with my Endless girls next week.

Daphne is finished but I feel that Lux needs an eye of Horace to look legit. And then I need to attempt to sew.
written by S. at 02:25 2 comments
about customising, Daphne, dolls, hunger, Lux, Neil Gaiman, photography, Pullip, sugar rush, The Sandman

I’ve decided that today is the first day of spring. It’s been the first day in a while that has not been accompanied by drizzle and a biting wind. The sky is a bright tapestry of white cotton wool clouds and a marigold sun. The heady scent of pollen is on the breeze, making me dizzy with delight.

Today was an Astrid flavoured day.

Her lime hair and apricot lips have a real kick. She’s like eating tangy sorbet on a warm day.
written by S. at 01:51 0 comments
about Astrid, dolls, photography, Pullip, spring, sunshine

written by S. at 01:50 0 comments
about colourlovers.com, new template
Newer Posts Home
Subscribe to: Posts (Atom)
I sometimes dream of running to some sun bleached desert or green, dewy suburban wilderness and living like a character in a Coupland novel.
cinders & rain. is the online home of S., a twenty something living in London who loves geekery, Japanorama, feminism, literature, electronica, crafting and collecting whatever takes her fancy.