I have a real soft spot for films that feature really strong women kicking arse so it may not come as a surprise to hear that I am extremely excited about the release of two films due to hit our cinemas this spring.

Watch the trailer and visit the official site.
I've been hyped up about Sucker Punch since I first heard about it last summer. I'll be the first to admit that it looks completely mad but in this case I think that's a good thing. The director has described the film as being 'Alice in Wonderland with machine guns' which reveals the main theme of the story. Set in the 1950s it tells the story of Babydoll, a young girl who is placed in a mental institution by her step-father a number of years after the death of her mother. Here she discovers the power of her imagination and her ability to blur the line between her dreams and reality. Along with four other girls she explores the boundaries of time and space while on the search for five items that will set them free. As the trailer shows, along the way they have to battle dragons, samurai, steampunk Nazis, gangsters and robots. All in all, it looks pretty epic. They're going to be showing the film at IMAX theatres - I think I may have to twist Cardy's arm! 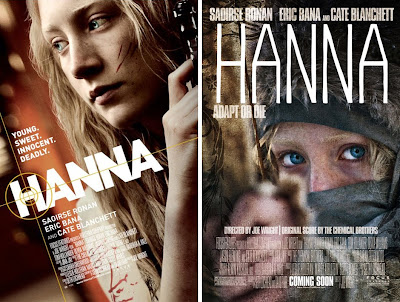 Watch the trailer and visit the official site.
I only heard about Hanna today but oh my WORD I can't wait for it to come out. It looks like Kill Bill meets Leon. Not as obviously fantastical as Sucker Punch, Hanna tells the story of a young girl raised by her ex-CIA agent father in the depths of wild Finland. She has been raised to be the perfect assassin and lives by the mantra 'adapt or die', her only knowledge of the outside world coming from her father's outdated encyclopaedia and a copy of Grimm's Fairy Tales. The film sees her being sent on her ultimate mission which sees her crossing continents and having to confront one of her father's old colleagues. From what I've seen from the trailer, the film is cleverly peppered with references to dark fairy stories with two really strong female leads. Just my cup of tea.
written by S. at 15:16
about cinema, fairy tales, feminism, Hanna, Kill Bill, Leon, Sucker Punch

Newer Post Older Post Home
Subscribe to: Post Comments (Atom)
I sometimes dream of running to some sun bleached desert or green, dewy suburban wilderness and living like a character in a Coupland novel.
cinders & rain. is the online home of S., a twenty something living in London who loves geekery, Japanorama, feminism, literature, electronica, crafting and collecting whatever takes her fancy.