It's been a while since I've updated this pretty little corner of the internet. Nothing notable has been going on in the life of yours truly, but my ears have been very happy indeed due to the release of some monumentally amazing albums. So I thought that I would get back into blogging by writing about my top three albums of the summer. 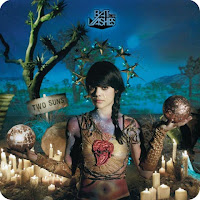 No.3 - Two Suns by Bat for Lashes
I'd seen the album artwork for this record in my favourite Fopp in London but my interest didn't go much further than thinking 'that cover looks rather nice'. When I saw that she had been booked to play at Latitude I thought that I'd better give her a listen. The first track that I tried was 'Siren Song' and I was hooked. Natasha Khan is the brains and the voice behind the outfit, and what a gorgeous voice she has, ranging from delicate soft tones to haunting wailing highs. There is something very Kate Bush about her, which is definitely a point in her favour.

Top three tracks:
1. 'Siren Song' - the track that first made me sit up and pay attention to this magnificent album. It's an intimate song that allows Khan to show off her full vocal talent.
2. 'Pearl's Dream' - not only is the tune incredibly catchy, but the lyrics are astonishingly beautiful. I especially like the break down and build up at the end.
3. 'Glass' - a really powerful song that opens the album. It definitely sets the tone. 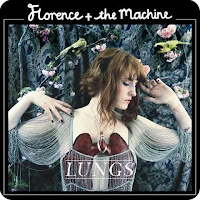 No.2 - Lungs by Florence + the Machine
I remember hunting down Florence + the Machine a number of months ago when their track 'Kiss With a Fist' was used as part of an advert. I listened to it on their MySpace but didn't really think about the band after that. Until they released 'Rabbit Heart [Raise It Up]' and got me thoroughly addicted. I was on a bus in London with Cardy and saw a whole wall covered in the promotional poster - it was a real hard sell! I downloaded the single from iTunes and when the rest of the album was available I ended up buying the deluxe version.

What really attracts me to the band is the powerful voice of Florence Welch, the front woman and founder, and the texture that she builds in her music. Tracks such as 'Drumming Song' are real treasures, as though she has woven together several beautiful threads to create something that is rich and full. Many songs on the album could be described as 'love songs', but Welch writes about the all-engulfing nature of love and how it can overwhelm you. Definitely one to watch for the future.

Top three tracks:
1. 'Rabbit Heart [Raise It Up]' - the first track that really showed me the power of Florence and her Machine. A fantastic place to start if you are yet to be introduced to the band.
2. 'Drumming Song' - probably my favourite track on the album. It builds to a delicious crescendo that leaves the listener exhausted and exhilarated.
3. 'Dog Days are Over' - a fantastic single that really demonstrates the passion and energy that Welch has for her art. Her vocal performance is astounding. 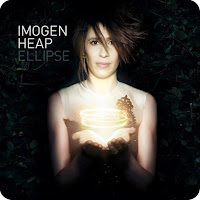 No.1 - Ellipse by Imogen Heap
I have been waiting for this album ever since Imogen Heap started her YouTube vBlog two years ago. Her previous album, Speak for Yourself, was a favourite of mine when I was back in university and was a symbol of my musical liberation and I knew that her next offering would be nothing less than perfect.

Heap doesn't disappoint. From the moment you hear the opening chords of 'First Train' home you know that this album is going to be something remarkable.

I haven't had the chance to listen to the whole album yet as I've held back from the temptations of iTunes and have ordered the two disc CD set, so at the moment I'm relying on the free stream that Immi has so generously provided (she really is a sweetheart). When it arrives it think it will deserve a post of its very own.

Top three tracks (so far...):
1. 'Swoon' - this was the track that really got me going when Immi would give her fans tauntingly short but sweet glimpses of the new album. Listening to it in full is a real treat!
2. 'Wait It Out' - it has a hint of 'Hide and Seek' at the beginning, but then the instruments come in and the magic really starts.
3. 'Earth' - I really like the rhythm of this track, but on further listening is may be replaced...
written by S. at 17:01
about Bat for Lashes, Florence + the Machine, Imogen Heap, music, scholar, update